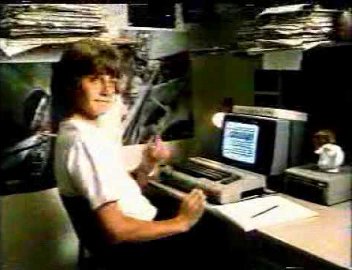 Often, computer geeks who started programming at a young age brag about it, as it is a source of geeky prestige. However, most computer geeks are oblivious to the fact that your parents being able to afford a computer back in the 1980s is a product of class privilege, not your innate geekiness. Additionally, the child’s gender affects how much the parents are willing to financially invest in the child’s computer education. If parents in the 1980s think that it is unlikely their eight-year-old daughter will have a career in technology, then purchasing a computer may seem like a frivolous expense.

“Me and some of my black friends were talking about the other guys in CS. Some of them have been programming since they were eight. We can’t compete with that. Now, the only thing that I have been doing since I was eight is playing basketball. I would own them on the court. I mean it wouldn’t be fair, they would just stand there and I would dominate. It is sort of like that in CS.”
— Undergraduate CS Major

Those “other guys” in CS are those white, male geeks who brag in CS newsgroups about hacking away at their Commodore 64s as young children, where successive posters reveal younger and younger ages in order to trump the previous poster. This disgusting flaunting of privilege completely demoralizes those of us who gained computer access only recently. However, CS departments—which tend to be dominated by even more privileged computer geeks of an earlier era when computers were even rarer—also assume that early computer adoption is a meritocratic measure of innate interest and ability.

CS departmental culture is described in the section “Culture of a Computer Science Department” of AAUW’s Why So Few? Women in Science, Technology, Engineering, and Mathematics (pp. 59-60):

Departmental culture includes the expectations, assumptions, and values that guide the actions of professors, staff, and students. Individuals may or may not be aware of the influence of departmental culture as they design and teach classes, advise students, organize activities, and take classes. Margolis and Fisher described how the computing culture reflects the norms, desires, and interests of a subset of males—those who take an early interest in computing and pursue it with passion during adolescence and into college. Margolis and Fisher point out that throughout the life cycle “computing is actively claimed as ‘guy stuff’ by boys and men and passively ceded by girls and women” (ibid., p. 4). This pattern of behavior is influenced by external forces in U.S. culture that associate success in computing more with boys and men than with girls and women and often makes women feel that they don’t belong simply because of their gender. In an interview with AAUW, Margolis explained: “There is a subset of boys and men who burn with a passion for computers and computing. Through the intensity of their interest, they both mark the field as male and enshrine in its culture their preference for single-minded intensity and focus on technology.” Within that environment this particular male model of “doing” computer science becomes the measure of success; however, because young women and men often have different experiences with computers and different motivations to study computer science, this model can alienate women.

About three-quarters of the men that Margolis and Fisher interviewed fit the profile of someone with an intense and immediate attraction to computing that started at a young age, in contrast to about one-quarter of the women in their study. Fisher explained, ‘There is a dominant culture of “this is how you do computer science,” and if you do not fit that image, that shakes confidence and interest in continuing.’ According to Margolis and Fisher (2002, p. 72), ‘A critical part of attracting more girls and women in computer science is providing multiple ways to “be in” computer science.’

In other words, at least 75% of male CS undergraduates had parents who were affluent enough to be able to afford computers at a time when computers were very expensive. Clearly, enrollment in CS is a social product of class privilege, not innate ability. Furthermore, this implies that computer geek prestige is an indicator of class privilege, in addition to being connected to technical proficiency.

Before commenting, please read “Check my what?” On privilege and what we can do about it.

147 thoughts on “If you were hacking since age 8, it means you were privileged.”