This is a guest post by Coral Sheldon-Hess, a web developer and librarian in Anchorage, Alaska.
She blogs at sheldon-hess.org/coral and tweets as @web_kunoichi.

I’ve been rolling this post around in my head for a couple of days, in between attending conference and binge-(re)watching Firefly.

It turns out, I have put a lot of time and effort—and, more importantly, thought—into creating and running a WiT group, so I have a lot to say on this topic. Also, Rebecca Stavick’s post isn’t the first anti-WiT-post I’ve read by a woman (great response to that one, here), never mind dealing with men’s arguments against these groups; so I’ve had time to think through a lot of these issues.

Myth #1 – Meeting as a group of women isn’t valuable in a male-dominated field. 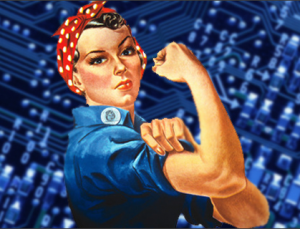 I really liked Eric Phetteplace’s response on Twitter, but I’m going to add a bit, since I have more than 280 characters to play with.

Networking is incredibly important to moving forward in one’s career, maybe especially so in tech circles, where everything moves so quickly and invitations to work on cool projects, or give important talks, depend so heavily on who knows you. So, on the surface, sure, it makes sense to get face time with male colleagues, and nobody is suggesting you shouldn’t.

But networking within a group of women is also incredibly valuable. Take the Merrill Lynch Four, who met and shared information and talked up one another’s work; they all ultimately ended up better off for it. Self-promotion can be hard for women, but promoting the work of other women? It’s easy to do, it’s never frowned upon, and it’s very effective! Also, it’s only possible if you can get into an environment where 1) you’re talking to other women, 2) about work-related stuff, and 3) you won’t be interrupted by men, who are, on average, better at self-promotion and are therefore likely to dominate the discussion.

Myth #2 – Learning with women is less valuable than learning in a gender-mixed group.

I think most people are aware that women have a lower level of confidence than equally competent men, in STEM subjects, as explored in the Fiorentine paper from 1988, comparing male and female medical students. (Short version: women consistently rated themselves lower on every attribute than their equally capable male colleagues.) You can find a bunch of respectable academic citations about differences in teacher behavior toward male and female students here, but I can also tell you, from six years’ worth of personal experience in male-dominated STEM classrooms: women get very little opportunity to talk, even if they are brave enough to do so. Which they aren’t, on average, due to the confidence gap: women report being afraid of asking stupid questions in front of their far more confident male peers, in part because they tend to misinterpret increased confidence as increased competence.

There is also a legitimate concern, when a woman is outnumbered by men in a STEM setting, that anything she does wrong will be extrapolated unfairly out to all women.

Women in a male-dominated environment, trying to learn about a field that’s generally viewed as male-dominated, also suffer from stereotype threat, which is made worse by prominent tech industry assholes (sorry, but he is) who make incorrect sweeping generalizations like “You have to have started programming at the age of 13 to be any good.” That is, as Philip Guo will tell you, total crap.

Do you know how you go about combating stereotype threat for women? Logic dictates—and now a study shows—that female role models are essential.

So, there it is: female-dominated classrooms, with female instructors, are an obvious win, for women learning technology concepts.

At first, I was totally on board with the idea that pink is problematic, which is why we chose a nice, bright blue-green for Anchorage Programming Workshop, with a logo featuring the Venus mirror to try to emphasize the “for women” aspect. Neither of the hosts for the group is overly feminine in our manner or dress, and we didn’t want to risk excluding other women who don’t identify with pink and rounded fonts. “Our group is for all women!” – that was our intended message.

But you know what? We ended up with pissed off dudes approaching our booth at the Anchorage Maker Faire and parents lamenting that we wouldn’t teach their sons how to code. Until we changed our RSVP form, we got guys RSVPing for our events and then not showing up after receiving the email (that went to all participants) emphasizing that “men are welcome, provided they are the guests of female-identified participants.”

I don’t think we’d get as much of that if we had gone with pink. So… I actually kind of respect the other groups’ forethought, on that count.

As for the “dumbed down language” thing, you know what? “Dumbed down” is so very rarely applicable that I propose we strike it from the lexicon. Making something approachable and friendly, so it doesn’t frighten off someone with low confidence, is a good thing! It’s also really hard to do, so, PROTIP: people who have put a lot of effort into making something usable get really angry when you use a phrase that dismisses their efforts and implies that incomprehensibility is a good goal.

Anything written by a competent instructor for an audience of new people will look “dumbed down” (argh) to an expert; that’s sort of the point. If you go look at the intro video and first week of CS50x, a freshman-level CS class at Harvard and online, you’ll see the same kind of language, the same reassuring tone. Because that is the right way to approach an introduction to technology. It has nothing to do with gender.

We do agree on one thing, sort of:

WiT groups—actually, all technology groups—need to do everything they can to be open to people who aren’t “exactly the same” as one another. Most WiT groups are really good about using “female-identified” as their descriptor, rather than just “female,” which is code that they are LGBT-friendly. Most have codes of conduct, which help advertise their commitment to diversity. Some are explicitly for women of color. These are all great! (And already happening, just, you know, for the record…) That isn’t to say any given WiT group shouldn’t work harder to increase the diversity of its participants; I just disagree that gender is the only path to diversity.

I find anti-WiT rhetoric frustrating, because it’s coming from both sides: men feel left out and want to tell us all about it, and women feel compelled to share their knee-jerk reactions to the color pink. Nobody starts with the assumption “This is a valid approach, based on good research and careful plans,” even though that is, in fact, the case. The arguments against these programs are shallow and easily countered, with only a few minutes’ research, yet they just keep coming.

Fact: WiT groups are a benefit to women and to the technology community at large, and their pedagogy and branding are, for the most part, well thought out and well implemented. They are worthwhile, and they deserve support. If you think they can be improved, volunteer to help, instead of tearing them down with grumpy blog posts.

15 thoughts on “In defense of Women in Tech (WiT) groups”