The votes came in and we decided to read Sorcerer to the Crown by Zen Cho. It’s a fast-moving period fantasy with a bunch of women and people of color, and it’s the first novel by this British-Malaysian author. Come for the dragons and stay for the social justice, or vice versa! You can read the first chapter for free online. Spoilers under the cut!

UK cover of Sorcerer to the Crown by Zen Cho

A Measure of Lawlessness

“Well, you are a pretty, insinuating child, and you will come to a bad end, no doubt.”

But she spoke with grudging approval. Mak Genggang might decry Prunella’s ways all she liked, but the same disregard of order and authority which Prunella possessed animated Mak Genggang’s own heart. Even if she thought the appearance of reproof due to her age and status, she rather relished a measure of lawlessness.

I am so different in temperament from Prunella Gentleman that I find it difficult to describe her; I am in awe of her unflinching support of her own desires and wish I could ever deploy the same dismissiveness with which she waves away inconveniences. I just finished watching the animated series The Legend of Korra, and Gentleman reminds me of Korra in her impulsiveness and willingness to fight. (She’s a lot slyer than Korra, though!)

If you like protagonist women who are fine with ignoring the explicit requests of those close to them, you might like the recent scifi novel Revision by Andrea Phillips, and more generally Zen Cho’s recommendations of stories about inconvenient women. And, of course, Cho’s other work includes this motif too. In her postcolonial historical romance novella The Perilous Life of Jade Yeo, her short story collection Spirits Abroad, and in Sorcerer to the Crown, Cho depicts adventurous, mercenary, or blasé women who use, disregard, or otherwise play with expectations of femininity. I need to read more of these stories to open up the Overton Window of possible ways women can be; I want not one star to steer by, but a diverse constellation to light my way.

My current take: It’s not that Gentleman, or Mak Genggang, are absolutely blithe about hurting others on the way to their own ambitions; rather, they are willing to knowingly do so, and to regret that harm less than norms dictate they ought, and thus enhance their decisiveness and imaginative range. I’d love to hear your thoughts on how Cho writes these characters such that they’re ruthless yet not evil (or perhaps you disagree with me on that point, and if so, tell me to reconsider!). 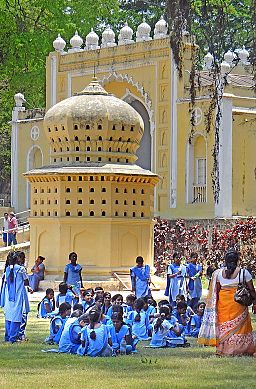 The entrance to Tipu Sultan’s summer palace in Srirangapatna, by Jean-Pierre Dalbéra from Paris, France [CC BY 2.0 (http://creativecommons.org/licenses/by/2.0)%5D, via Wikimedia Commons

The Grand Sorceress is from Karnataka, where my family’s from! Tipu Sultan of Seringapatam (modern spelling: Srirangapatna) is a real historical figure and I have visited his old palace. He was the last, or one of the last, Indian kings to defeat the British in battle (although less than 20 years later he and his capital fell to a British attack).

It’s rumored that Srirangapatna finally fell because one of Tipu Sultan’s confidants betrayed him: “In the fourth war British gold effected what British guns had so far failed to accomplish. The ministers betrayed the master.” This divide-and-conquer shit happens frequently when richer countries invade poorer ones, and thus integrity is one of the precious things imperialists take away from the colonized. I’m ruminating over how Mak Genggang and the Grand Sorceress do not and will not give in on this issue — the Grand Sorceress going so far as to kill herself to atone for inadvertently betraying secrets to the enemy.

When I read the Grand Sorceress’s promise that the British won’t be able to use the familiars’ eggs:

“The foreigners will not touch them. I have enchanted the stones so that even should a foreigner contrive to hatch a spirit, it would turn instantly upon him and tear out his throat.”

I found deep fulfillment in a place in my chest where I hadn’t even known there was a lack. A magical curse to prevent exploitation, to arrest the otherwise inevitable narrative of whites heedlessly extracting value from my people. Hari Kondabolu darkly jests about the British “finding” gems in India; a fantastic re-imagining might populate Tipu Sultan’s dungeon for British prisoners of war (right) with those who attempted such things, and all manner of other unsavory characters.

Which would be fun to read about in some fanfic!

The preliminary data from this year’s signups for the Yuletide Treasure fan fiction exchange suggests that we’ll see some Sorcerer to the Crown stories. Those who nominated Sorcerer to the Crown as a fandom specified a special interest in stories featuring the Grand Sorceress, Henrietta Stapleton, Mak Genggang, the witches of Janda Baik, Maria Wythe, Stephen Wythe, Paget Damerell, Rollo Threlfall, and, of course, Prunella Gentleman and Zacharias Wythe. (Yuletide signups are open till 9am UTC tomorrow, October 27th, in case you want to offer/request fanfic.)

My next book club post about Sorcerer to the Crown, in a day or two, will talk about Zacharias Wythe, microaggressions, and diaspora. See you in the comments!