Ah, Mother’s Day, that time when our media and shopping spaces fill up with the assumption that “What Mum Wants” is a universal concept. Just once I’d love to see a ‘last minute gifts for Mum’ suggestion list that includes a kabuki sword, a new modem, and a chemistry set. Or maybe noise-cancelling earphones, and a new podcasting microphone. And a butler.

This week, I’d just signed up for Lenovo’s mailing list in the hope of spotting a special, which it turned out was just in time! Just in time to be asked whether I was Fashionista Mum, Super Mum, Foodie Mum, Breakfast in Bed Mum or Bargainista Mum. A fellow geek feminist pointed out the inexplicable absence of Installing Linux the Moment It Arrives Mum. Funny that. 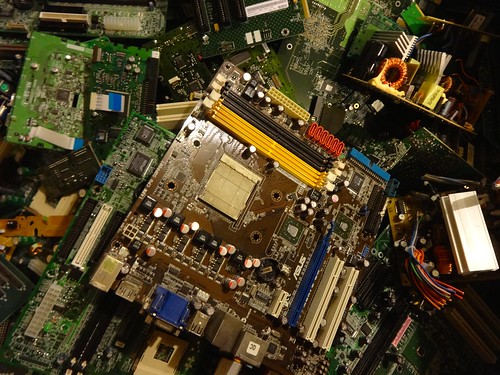 Got any bouquets or brickbats for geeky Mother’s Day ads? Or anything else you want to talk about in an open thread?

About open threads: open threads are for comments on any subject at all, including past posts, things we haven’t posted on, what you’ve been thinking or doing, etc as long as it follows our comment policy. We’re always looking for fluffy, fun, silly, cute or beautiful open thread starters, please post links to Pinboard with the “gffun” tag.

You can suggest links for future linkspams in comments here, or by using the “geekfeminism” tag on delicious or pinboard.in or the “#geekfeminism” tag on Twitter. Please note that we tend to stick to publishing recent links (from the last month or so).

This is an Ask a Geek Feminist question for our readers:

We keep hearing the old chestnut “sex sells”, and we hear it most especially when we complain about how some item of geek culture is sexist – video game bosoms or ridiculous outfits on superheroines, for example – as if that was some kind of excuse for objectification.

Does sex sell? Does sexism sell? Where’s the evidence for this? I’ve got moderately good Google-fu but haven’t been easily able to turn up much in the way of useful information or anything more rigorous than blog rants and newspaper opinion pieces. Can anyone answer this one, or point me to some useful resources? Where is the real, empirical evidence for this? Are advertisers and content providers (comic artists, game producers etc.) operating on an outdated or scientifically unjustified model?

I’ve read quite a lot of your basic feminist literature. I’d like some science, or at least some vaguely scientific numbers. Can anyone help?

What do you think?

You can suggest links for future linkspams in comments here, or by using the “geekfeminism” tag on delicious, freelish.us or pinboard.in or the “#geekfeminism” tag on Twitter. Please note that we tend to stick to publishing recent links (from the last month or so).

This is an Ask a Geek Feminist question:

When choosing pictures for a conference website from the event held the previous year we have specifically looked for photos that happen to include women, to the extent that they are disproportionately represented compared to the actual attendee breakdown, with the specific objective of making the event seeming more diverse than it is, so that we actually get a more diverse set of attendees for the next one. This seems OK to me, would be interested in what others think.

A related point is where there is a group photo of everyone at an event, I would kind of encourage women in attendance to take part because avoiding group photos creates a negative feedback loop.

What do people think? I’m not sure. The kind of questions I’d ask before even beginning to answer this are along the lines of the following:

Is this the only/main diversity scheme for this conference? (I didn’t edit the question, so this is all the information provided.) For that matter, what do you want diversity for? For all that I and other people who write here really want diversity to be a concern for geekdom, I think having it as solely a checklist thing is a disservice to the people who will comprise the diversity. What are you offering those people? What are they offering you? Is it all one way? Is this about avoiding negative publicity or something more?

After that, are you behaving like a more diverse/diversity-friendly conference in ways other than your advertising? See Women-friendly events on the wiki for some ideas.

Finally, I am not a lawyer, but in some circumstances in some jurisdictions you may want a model release for this use of people’s images.

I’m a big fan of advertisement-hacking, and I think quite a lot of people here will get a kick out of this one, so even though it was linked in the linkspam I’m putting it up here:

Public transit ad depicting a brain: note pointing to one side says "Can you solve one of our puzzles" and the note pointing to the other side reads "can you explain it to your mom?". Text below reads "We're hiring hackers with people skills". Someone has added a post-it note to the advertisement which reads "My mom has a PhD in math"

Edit: If you’re crediting this photo, it was put on twitpic by jessiebennett. Some people are giving GeekFeminism.org all the credit which doesn’t really seem fair!

Edit 2: Note the appology from ITA in the comments.

I’ve just had a conversation with an acquaintance in which he proudly showed off a PSA-style advertisement that a friend of his made. The advertisement makes play on a very real and very problematic trope to get its point across, but I’m not going to say which as it’s not entirely a feminist issue and it is the response I wish to discuss here.

The ad was trying to be cute, and since it used adorable fluffy animals doing people things, it was. In that regard, it was cute. However, despite the pets-as-people gimmick, the toxic trope got in the way. It killed what I assume would otherwise have been enjoyment of the clip. Killed it dead.

See, the advertisement didn’t just use animals as faux-people; it equated a whole socially disadvantaged-by-circumstances section of society as animals, and did so in a really negative way.

The group to which this ad clip was displayed were, I guess, supposed to squee. We were supposed to adore the cuteness that the advertisement was using. But we couldn’t. I mentioned to some of the group elsewhere that I was choking on the trope. Some of those people also noticed it also, and mentioned it outright to the guy. He wasn’t impressed.

“It’s satire! It’s on broadcast TV!” he cried, as though satire makes everything ok. Or maybe it’s because typical everyday mass-media advertising morality is like totally awesomely awesome.

Then came the best part. Out he came with “You are the one who noticed it, not I, ergo you are the who thinks of those people that way, not I!”. Yep, you can mark that one off on the bingo board.

When have you, dear readers, had this one thrown back at you? How did you respond?

A friend of GF just Bcc’d me on this email, which was sent to the CEOs of Motorola and Verizon along with a number of other senior executives of those companies.

Two weeks ago I researched, then bought four Motorola/Verizon Droids for my family. Without my research and influence, we’d probably have bought two Blackberries for the adults and dumbphones for the children.

Today I learned that Motorola is running ads, “Pretty”, explaining that Droids aren’t for “princesses”, trade “hair-do for can-do”, and by implication are not for women. (Yes, I do occasionally call my daughter “princess”. She’s currently attending an Ivy League institution.) My daughter and I are currently discussing buying ornamental skins for our Droids; I do hope this won’t crash the Android operating system.

I make over $100,000 a year. I work in high tech. And I control major purchasing decisions. Why are you running advertisements suggesting that your product is primarily for men?

The addresses are all there for you if you should feel the urge to write a letter yourself. The email’s author tells me she guessed them based on the standard address format used by the companies in question, and says that none of them bounced. (Some guesses that did bounce have been removed from the list above.)

And here’s the ad in question:

Another blog post on the subject, which I came across yesterday via the geekfeminism tag on delicious is Girls are still icky, over at Coyle’s InFormation. I’m sure there are more out there, so feel free to link them in comments.