We link to a variety of sources, some of which are personal blogs.  If you visit other sites linked herein, we ask that you respect the commenting policy and individual culture of those sites.

You can suggest links for future linkspams in comments here, or by using the “geekfeminism” tag on Pinboard, Delicious or Diigo; or the “#geekfeminism” tag on Twitter. Please note that we tend to stick to publishing recent links (from the last month or so). 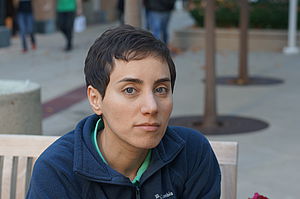 The Fields Medal is the highest award in the field of mathematics. Some people have called it the math equivalent of the Nobel Prize, though it’s not a perfect analogy since Fields medalists must be younger than 40 years old. Fifty people received the Fields Medal between 1936 and 2010 (the award is given every four years to between two and four mathematicians). All of them were men.

Today, Stanford math professor Maryam Mirzakhani (born in 1977) became the first woman, and the first person of Iranian descent, to win the Fields Medal. (It was also awarded to Artur Avila, Manjul Bhargava, and Martin Hairer.) Her work lies in the intersection of geometry, topology, and dynamical systems.

You can read more about Dr. Mirzakhani in a profile of her by Erica Klarreich:

Mirzakhani likes to describe herself as slow. Unlike some mathematicians who solve problems with quicksilver brilliance, she gravitates toward deep problems that she can chew on for years. “Months or years later, you see very different aspects” of a problem, she said. There are problems she has been thinking about for more than a decade. “And still there’s not much I can do about them,” she said.

Mirzakhani doesn’t feel intimidated by mathematicians who knock down one problem after another. “I don’t get easily disappointed,” she said. “I’m quite confident, in some sense.”

The finalists for the 2014 Hugo Awards were announced over the weekend, and gee golly are there some exciting works on that slate. I’m especially excited to see Mary Robinette Kowal’s “The Lady Astronaut Of Mars” on the ballot (it was denied a place on last year’s ballot because it originally appeared as an Audiobook). It’s sharing the novelette category with Aliette de Bodard’s “The Waiting Stars,” which I’ve not read yet but am looking forward to checking out.

Ann Leckie’s Ancillary Justice, which is up for Best Novel, has been making a lot of shortlists this year, including the Hugo, Nebula, and Clarke awards. I’m also glad to see Sofia Samatar’s “Selkie Stories Are For Losers” up for the short story Hugo–it’s definitely worth a read if you haven’t seen it yet (Samatar is also in her second year of eligibility for the John W. Campbell Award for Best New Writer).

And I’m excited that my fellow Writing On The Fast Track alum and all-around good guy Mike Underwood is up for Best Fancast for The Skiffy and Fanty Show. The team behind it includes several other wonderful people, including authors and diversity advocates Julia Rios and Stina Leicht.

If you’re interested in checking out these and the other wonderful & deserving works on this year’s ballot and voting for this year’s Hugo awards, supporting memberships to this year’s WorldCon are available for 40$US. In addition to voting rights, supporting Members get a copy of the Hugo Voter Packet, which contains digital editions of most of the works on the ballot. This works out to a pretty great bargain if you’re excited about even a few of the nominated works–plus you get to vote on this year’s Hugos.

You may notice that there are a few surprising names on this year’s ballot. Theodore Beale (aka Vox Day, a writer whose hate speech got him drummed out of the SFWA last year) and Larry Correia encouraged their fans to nominate a particular ‘slate’ that included several vocal conservatives. Some of their fans have since been heard crowing about how they’ve succeeded in making some kind of political point by getting these folks on the ballot.

It’s unfortunate that they’ve chosen to politicize the Hugo awards in this way. But I would remind folks that are thinking about buying a membership that the Hugo Awards use “Instant Runoff Voting,” a system which allows voters to rank the candidates in each category. The system allows people to rank “No Award” higher than any or all candidates on the ballot. Indeed, in 1987, that very thing happened in the novel category: No Award came in ahead of L. Ron Hubbard’s Black Genesis.

Since invoking Beale’s name tends to cause some of the cesspools of the internet to backflow into the tubes, this is your reminder that we have a strictly-enforced comment policy. So if you’re here from Beale’s fan club: run along. Your comment will go straight to moderation and no one will see it.  There are plenty of places online where you can contribute to a net reduction in the worth and dignity of humanity. This is not one of them.

The James Tiptree, Jr. award is a yearly “prize for science fiction or fantasy that expands or explores our understanding of gender.” The award council has just announced that the winners, for work published in 2009, are:

Also check out the Honor List and Long List for other recent speculative fiction exploring gender. Stuff you can read online right now:

The Tiptree Award presentation is a highlight of WisCon, the feminist science fiction convention in May. Â Just in case I won’t see you there to hear you enthuse about scifi in person, leave recommendations in the comments!

If you have links of interest, please share them in comments here, or if youâ€™re a delicious user, tag them â€œgeekfeminismâ€ to bring them to our attention. Please note that we tend to stick to publishing recent links (from the last month or so).

Thanks to everyone who suggested links in comments and on del.icio.us (yes, I know they don’t care about the old-school URL anymore but I miss it).

The Anita Borg institute is one of my favourite organisations out there for women in the tech field. Among their many activities, they have an annual award for Women of Vision, who have made a significant contribution to technology as innovators, leaders, or in creating social impact.

Nominations for the 2010 award have been extended til December 18th. If you know a woman who’s made a significant contribution to technology this year, visit the Anita Borg Institute Women of Vision website and nominate her!

If you have links of interest, please share them in comments here, or if youâ€™re a delicious user, tag them â€œgeekfeminismâ€ to bring them to our attention. Thanks to everyone who suggested links in comments and on delicious.

If you have links of interest, please share them in comments here, or if youâ€™re a delicious user, tag them â€œgeekfeminismâ€ to bring them to our attention.

I was hoping to get round to doing this last week, but things exploded. Luckily, Peggy over at the Women in Science blog has written up a great post about Lin He and Beth Shapiro, two women scientists who received the $500,000, no-strings-attached grant this year:

Lin He’s research involves a class of small ribonucleic acid, or RNA, that are not transcribed into protein like messenger RNA. Instead, these microRNAs or miRNAs bind to messenger RNA to regulate the amount of protein produced. This entirely new level of dosage regulation in mammals was not realized until 2000, even though miRNAs were first discovered in 1993. Now, miRNAs have been shown to be involved in many aspects of development and diseases, He said.

Beth Shapiro is an Assistant Professor in the Department of Biology at Pennsylvania State University. She is “an evolutionary biologist who integrates molecular phylogenetics with advanced computational biostatistics to reconstruct the influences on population dynamics in a wide variety of organisms.” She is using the methods she and her colleagues developed to study the population history of recently extinct (like the dodo) or currently threatened species to assess the effects of environmental change on polar bear populations, an approach that will help in shaping conservation efforts. She also has been studying the evolution of RNA viruses in individual patients, an approach that may help in understanding the development of virulence in human pathogens.

Emma Jane Hogbin is an open source nerd, crafty advocate and small town champion. She blogs at emmajane.net; this HOWTO was originally posted there.

This week I started an award at my former high school for a senior female student that has demonstrated creative use of technology. She doesn’t need to have the best marks, she doesn’t need to have sustained performance. She just needs to have shown a sliver of inspiration and interest in technology to be rewarded and encouraged. In the game of Alice’s Restaurant and World Domination, you have to start by doing one thing different. Here’s the FAQ on why I did it and how you can start your own award too.

Why a high school award?
Every November at West Hill Secodary School there’s an award ceremony. Kids who win awards get to stand up in front of their entire school and be recognized for something they’ve accomplished. The whole school claps. The award winner then gets a line on their resume that says they’ve won an award. It doesn’t matter how much money the award is, you still get to say that you’re an award winning student and that can be the difference between getting accepted into the program you want, and just being another faceless application.

Creative use of tech? Huh? What’s up with that?
This isn’t an award for being a nerd or being a jock. It’s an award for two words that hardly ever go together in high school: creativity and technology. That means an entire school full of students are going to be exposed to the idea of creative and technology going together. It comes with a small sum of money, which means some of the students will work towards achieving this award.

Why a senior student?
This is an award that students can work towards over the course of their four years in high school. Student projects in the junior grades (ought to be about) mastering specific techniques and tools, by their senior years students should have the skills they need to start expressing themselves with the tools they’ve learned. Of course there are some truly exceptional young technologists (Drupal has a 13 year old core developer who’s already been around for two or three years), but these geniuses are probably winning other awards too.

Why a female student?
Because I want to encourage girls to use technology in ways that interest them.

I am still working with West Hill to roll out the award, but it was remarkably easy to get the process started. Here’s how you too can start an award to encourage girls to stay engaged with technology.

And that’s it! One billable hour of your money (and a stamp and envelope for the cheque). 20 minutes of your time. And you have made a female student an award winning technologist. Now get out there and do it!