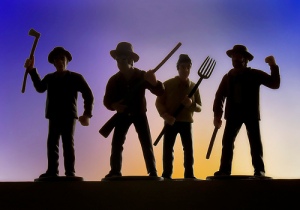 A few years ago, a wonderful woman and prominent tech blogger named Kathy Sierra was driven offline because the the readers of a hate website called MeanKids decided SHE had to die. In a substantial media circus, it was determined that the primary reason the MeanKids site targeted her was because she was too nice. It annoyed them. They threatened to kill her. They posted pictures of her with a noose. They said they were waiting for her at her next conference.

She stopped blogging. Eventually she got rid of her Twitter account. She cancelled speaking engagements because she was afraid she would be murdered. It seems that as soon as a woman is popular enough to be noticed, someone decides it’s time to play dirty. (In the midst of the media attention, they took the opportunity to post obscene and harassing photoshopped pictures of Robert Scoble’s wife at the same time.)

These people think that if they scare the women of our community enough, this will stay a secret, and their misogyny and violence can snowball. This seems to be a group attack, and here, their details are FAR more specific than they were in the Kathy Sierra case.

This is being planned, and planned thoroughly.

These people are escalating, and they’re looking for a success. Hate bloggers claim innocence because they are acting within their First Amendment rights. But their mobs look up to them, and the mob mentality that they are stoking is escalating.

I am being stalked. People want to kill me. They want me to be afraid.

These people are planning a hate crime, and they are relying on me hiding in silence to succeed.

Read the rest at Ittybiz: Death Threats and Hate Crimes, Attacks On Women Bloggers Escalating. Maybe some of you are getting hit elsewhere, and you should know that it’s not just you:

He has already started harassing a few of my colleagues and judging by the overwhelmingly positive and inflamed reaction he’s getting from his audience, he’s not going to stop. More women are in his sights. It seems he has a list, and his mob is eager to see whose names are on it.

If you have links of interest, please share them in comments here, or if youâ€™re a delicious user, tag them â€œgeekfeminismâ€ to bring them to our attention. Please note that we tend to stick to publishing recent links (from the last month or so).

Thanks to everyone who suggested links in comments and on delicious.

When I look around my Google Reader feeds, I see so many insightful, intelligent political and technical blogs by women, but hardly any by men.

For instance, I read Shakesville every day for US and international politics, The F-Word covers the UK, while for what’s going on in Australia I turn to Hoyden About Town or Senator Kate Lundy who blogs politics and tech.

Other tech blogs I follow: Shelley Powers’ Burning Bird, K. T. Bradford’s netbook and gadget reviews, and Amy’s Ramblings on open source software and social tech. And of course one of the best women blogging about technology is Kathy Sierra… oh, wait.

I guess, if I really think about it, it’s possible that I just don’t notice them.

EDIT: The comment thread on this post is now closed. Please check out the followup post which contains an explanation of what’s going on here, and a chance to discuss further.

A comment over on the Geek Feminism wiki asked whether we aren’t damaging the community by documenting sexism. I don’t want to get too 101 on our fine blog, but I do want to talk about why I consider our pretty long list of sexist incidents in geekdom a success.

My first geek feminist forum, and still the one I participated longest in and therefore in many ways most influential on me, was LinuxChix. Things I learned over there included the reasons why having men dominate conversations can be anti-feminist, via the discussion around the document now available as behaviour in technical forums, which was originally a response by Valerie Aurora to a problem where the LinuxChix techtalk list was seeing fewer and fewer posts by women and was generally perceived as scary and hardcore.

We also had a long-standing problem articulating what it was that led to the extreme gender imbalance in Free Software development and many of its user communities. I can’t speak for the community, but what I remember feeling about those discussions was a major unease. There was sexism in computing and in Free Software… probably? Some women had stories, some women didn’t. There was social, peer and societal pressure on young women considering science and technical careers or even on developing those skills… probably? Again, some women had stories, some didn’t.

Had you asked me in 2003 for troublesome incidents in Free Softwareâ€”are we doing anything wrong, or is this a problem we’ve inherited from other people who did things wrong, or is this just a thing about women, that they don’t like to be too nerdy in their spare time?â€”I don’t know that I would have been able to give you examples of anyone doing anything much wrong. A few unfortunate comments about cooking and babies at LUGs, perhaps. Things started to change my awareness slowly. Valerie’s 2002 HOWTO Encourage Women in Linux dug up some incidents at LUGs. In 2005 LinuxChix itself got some attention from (trigger warning) the troll Skud posted about. I was personally present at a sexualised presentation, the Acme::Playmate presentation at the Open Source Developers Conference in 2006. And in 2007, very soon after I had seen Kathy Sierra keynote linux.conf.au 2007, she was scared out of her work writing about technology by (trigger warning) online harrassment and for the first time, I personally saw the Internet explode over the issue of active, virulent sexism against women in technology.

I do not in fact find writing the wiki documentation of incidents in geekdom very satisfying. The comment linked at the beginning of the post compared the descriptions to a rope tying geekdom to the past. Sometimes being known as a wiki editor and pursued around IRC with endless links to yet another anonymous commenter or well-known developer advising women to shut up and take it and write some damned code anyway is like a rope tying me to the bottom of the ocean.

But what makes it worth it for me is that when people are scratching their heads over why women would avoid such a revolutionarily free environment like Free Software development, did maybe something bad actually happen, that women have answers. It’s not the only answer, there’s still all that social, peer and societal pressure, the shorter leisure hours, and so on, after all. And there’s no level of harrassment or cruelty that won’t find someone, plenty of someones, prepared to immediately argue that it’s really no big deal, what are you doing here, giving up? Letting them win? But now if when I’m asked about whether geek women have problems and why there aren’t more of us, I’m not left fumbling to explain it even to myself.

I don’t know what the Mary of 1999 (my watershed geek year wasn’t 1998, in fact) would have done if she’d come across that page in more or less the condition the wiki comment described, “the girl entering the community without any predispositions”, the woman vulnerable to being misled into thinking that geekdom is full of scoundrels (or, we might argue, not entirely misled). Maybe she would have run, I can’t say for sure that she wouldn’t have. But what woman is without baggage? In 1999 as a teenage girl with hair flowing down to my waist (I tell you what, short hair has cut my street harrassment down nearly as much as it cut my grooming routine down) I walked down the street to the steady beat of rape threats from passing vehicles. At least I would have found that geek women were talking about it and had got together and got each other’s back.

After George Sodini went on a misogynist shooting spree, killing three women, a lot of people were making comparisons to the Virginia Tech or Columbine shootings. But among women in the tech world, the comparison I most often heard was the Montreal Massacre.