In the absence of doctors’ records, it can never be known how many babies died in the U.S. because of thalidomide’s “clinical trials”; Dr. Lenz estimated that in forty percent of cases where there was fetal exposure, the infant died in its first year. Eleven women (or perhaps more) gave birth to thalidomide babies in the U.S., but there may have been many more whose parents never discovered that their children’s malformations were caused by Kevadon. It is unbearable to speculate upon how many more might have been born but for the singular obduracy of Frances Kelsey.

All quotes are from Dark Remedy: The Impact of Thalidomide and Its Revival as a Vital Medicine, by Trent Stephens and Rock Brynner. 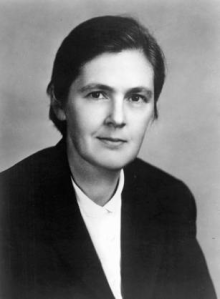 This is the story of a woman who saved countless lives and protected any number of babies from grievous harm, using nothing but science and her own strength of character.

Born Frances Kathleen Oldham on Vancouver Island, British Columbia, she studied at McGill before moving to the new Pharmacology department at the University of Chicago (which accepted her on the assumption that she was a man.) At Chicago she developed an interest in teratogens and earned her Ph.D. and M.D. She also met and married Dr. F. Ellis Kelsey. When he was appointed special assistant to the surgeon general, the Kelseys moved to Washington, D.C.

Frances Kelsey worked for the AMA reading doctors’ testimonials for various drugs, and she and her colleagues could soon detect among them the well-paid hacks for Big Pharma. It turned out to be excellent training for her appointment in 1960 to the Food and Drug Administration as one of only seven full-time and four part-time physicians reviewing applications to approve new drugs.

A week after she reported for work, the application for thalidomide landed on her desk. Her first assignment! The drug had already been approved in Canada and more than 20 countries in Europe and Africa. Another person might have rubber-stamped it. Kelsey did not.

The first thing Kelsey noticed as she examined the four-volume application from Richardson-Merrell was the names of the doctors – including that of Dr. Ray Nulsen of Cincinnati, Ohio – whose testimonials were included with the application: many were the same hacks she remembered from her time at the AMA… the mere presence of those names did not bode well for the application in Frances Kelsey’s eyes. In fact, as she looked through the application, she found it wanting in many respects.

The chronic toxicity studies had not run for long enough. There wasn’t enough data about absorption and excretion. The animal studies and clinical trials were not detailed enough and there wasn’t enough documentation. What documentation there was, was troubling. Humans responded to thalidomide by lapsing into a deep sleep, but rats did not. Worse, no lethal dose could be found for rats. That made it possible that rats weren’t absorbing the drug at all, while humans were. If that were the case, the animal studies shed no light on possible toxicity to humans.

Despite all this, Kelsey had no grounds for rejecting the application. Instead, she told the company she needed more and better data before she could take any action. In fact, she stalled. She declared the application incomplete and thus ineligible for submission fifty-eight days after it was submitted. That meant it would have to be resubmitted, giving her an extra sixty days to think about it.

You can imagine how much this delighted the pharmaceutical company.

But when Richardson-Merrell pressured her, the medical officer did not budge.

Richardson-Merrell subjected Kelsey to a withering siege of professional aggravation, provocation and intimidation. Altogether she chronicled fifty-one exchanges with the company, when there should have been none.

The company’s scientific officer, Dr. F. Joseph Murray, got her name and phone number (which he shouldn’t have had) and bombarded her with calls. What data did she need? How could the patient instructions be reworded? Could he submit revisions casually, over the phone (thus leaving no paper trail)? How about if he shared data with her privately, rather than in the formal application?

In February, 1961, Kelsey read the first reports of thalidomide causing peripheral neuropathy in the British Medical Journal.Â She challenged Murray with it. He admitted that Richardson-Merrell had known of the reports, and offered to add a warning to the drug’s packet insert. No dice. Despite the nerve damage issue, Richardson-Merrell wanted to declare the drug safe for use in pregnancy.Â But, Kelsey argued, if thalidomide could cause nerve damage in adults, how could the company prove that it would not cross the placental barrier and cause even worse damage to a fetus?

Testing this would take years and cost untold money. Richardson-Merrell was disinclined.

Kelsey required the company to resubmit the application six times. Richardson-Merrell tried to go over her head, but she stood her ground.

On November 18, 1961, the first statements came out of Germany about birth defects attributable to thalidomide. On November 29, the drug was removed from the German market.

On March 8, 1962, Richardson-Merrell withdrew its application.

On August 8, President Kennedy gave Frances Oldham Kelsey the President’s Award for Distinguished Federal Civilian Service, the highest honour given to a civilian. As well he might. At least 4000 children in Europe were born affected by the drug. Kelsey’s rigour averted a similar tragedy in the USA.

flows from a rare combination of factors: a knowledge of medicine, a knowledge of pharmacology, a keen intellect and inquiring mind, the imagination to connect apparently isolated bits of information, and the strength of character to resist strong pressures.

Anyone for a Geek Feminist manifesto?

She became an American hero, gracing the cover of LifeÂ magazine, receiving and answering hundreds of letters, and then quietly returning to her job of protecting the public’s health.

In fact, for her next trick, Kelsey helped reform the FDA.