Over at The Recompiler, I have a new essay out: “Toward A !!Con Aesthetic”. I talk about (what I consider to be) the countercultural tech conference !!Con, which focuses on “the joy, excitement, and surprise of programming”. If you’re interested in hospitality and inclusion in tech conferences — not just in event management but in talks, structure, and themes — check it out. (Christie Koehler also interviews me about this and about activist role models, my new consulting business, different learning approaches, and more in the latest Recompiler podcast.) 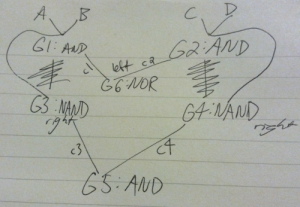 NAND and NOR gate sketch, coincidentally in the shape of a heart – by me this week

When part of the joy of a place is that gender doesn’t matter, it’s hard to write about that joy, because calling attention to gender is the opposite of that. I want to illustrate this facet of my Hacker School experience: mostly, Hacker Schoolers of all genders talk about mostly the same things. And we talk about them in all gender combinations — including, just by chance, among women.

The “Bechdel Test” asks whether a work of fiction includes at least two women with names who talk to each other about something other than a man. Thus in my blog I have an occasional series listing topics I’ve discussed with other women. My life passes the Bechdel Test! ;-)

So here is an list of some things I’ve discussed with Hacker School women. (About half the facilitators, cofounders, participants, and residents are women.)

You can apply now for the next batch — apply by Saturday night, December 14th.

* an oversimplification! But you get what I mean.